Our usual rehearsal venue is:

We rehearse every Monday evening from

Come along and try a session!

We have a stock of scores available to hire 30p per copy per month. Please visit www.gerontious.net to see what music we have for hire then email with your requirements.

This is where you can find the latest news about us and our activities.

We are back singing live and it is so GREAT! looking forward to singing Brahms Requiem at our Spring Concert on 2nd April.  Singing really does make you feel so much better.

In the first half of the programme we sang the ‘Messe Basse’, the four sections of the Mass being interspersed with a soprano solo, beautifully sung by Ellie Neate, who is doing an opera course at the Guildhall School of Music and Drama, and some Brahms Intermezzos and selections from Fünf Lieder Op.105 by Brahms played superbly by our resident accompanist Duncan White.

We sang the Brahms Requiem in the second half.  We put everything we had into singing it,  inspired by our talented and enthusiastic Music Director, Thomas Chapman and superbly supported by our accompanist joined by his brother Craig.  Ellie Neate sang the soprano solo in movement 5, with baritone Michael Hickman, singing a powerful solo in movement 6, Michael pursues a freelance singing career in London, including BBC Singers,  EXAUDI, Opus Anglicanum and the Oxford Consort of Voices sang the solos in units 3 and 6. Our accompanist also played two selections from Brahms's Sixteen Waltzes Op.39 in the second half.

We felt that this was one of the best concerts we have ever done and we are now looking forward to our summer concert. 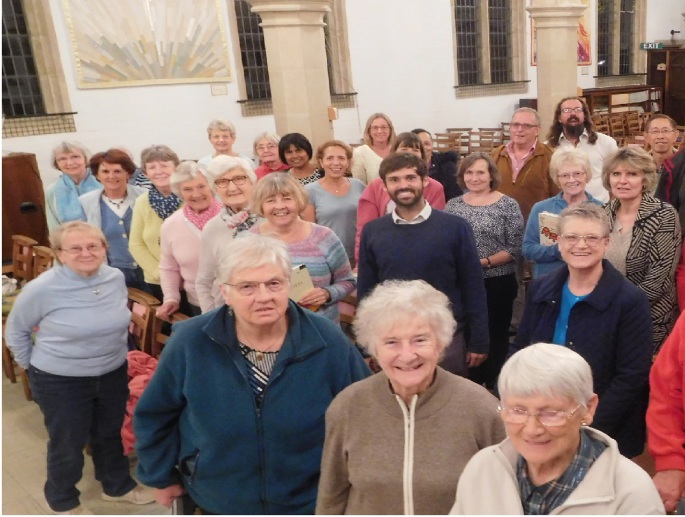 With our Musical Director Thomas Chapman. We had a great time at our Folk Rock for Choirs Workshop day on 15th February.  We learnt songs from the repertoire of Simon and Garfunkel, Crosby, Stills and Nash, The Byrds, Fairport Convention and Steeleye Span, which were enthusiastically interpreted by our intrepid Music Director, who managed to teach us orally without a note of music in front of us, aided and abetted on the piano by our valiant accompanist.  We had some wonderfully complimentary comments from our audience, saying how much they had enjoyed the day, and that it was possibly the best of our workshops that they had ever been to.

A most enjoyable event.  We sang Haydn's Missa Sancti Nicolai, which was very appropriate for the Christmas period as St. Nicholas is commonly known these days as Santa Claus.  The mass was composed in 1772 when Haydn was employed by Prince Nicolaus Esterhazy whose birthday fell on 6th December, the feast day of St Nicholas.  We presented the mass in the first half of the concert, while the second half featured a variety of carols, some for audience participation.  Our accompanist performed piano solos by Grieg in both halves of the concert.  We had four wonderful soloists for the mass, and the whole concert was accompanied by a professional orchestral ensemble.

We are now looking forward to our Spring concert, when we will be performing Rossini's Petite Messe Solennelle.  We hope to see you there. THE SUMMER CONCERT. What's playing at the Roxy? Everyone had great fun learning what was playing at the Roxy at our Summer concert.  We were delighted to welcome such a large audience who seemed to hugely enjoy hearing once again the well-loved hit tunes from Guys and Dolls and South Pacific.  Add to this the three piano solos by Thomas 'Fats' Waller played by our brilliant accompanist and a medley of jazzy showstoppers plus folk favourites from the UK and America and you have all the ingredients for a light-hearted summer evening's entertainment.  A big thank you to our highly esteemed Music Director for choosing such a great programme.